5 ways P2P lending will hit the mainstream in 2016 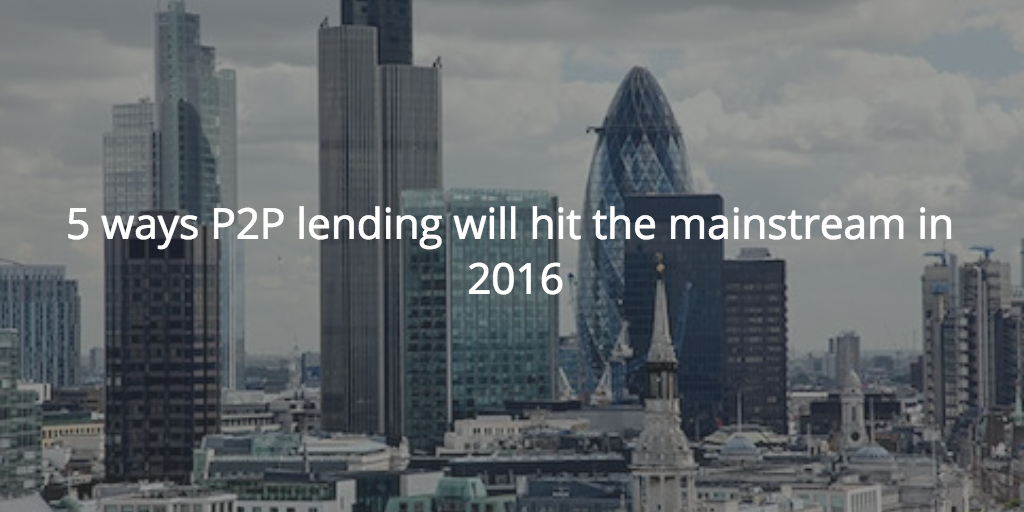 2015 was a record-breaking year for peer-to-peer lending, with the amount lent through UK platforms reaching over £1.5 billion. Predictions have been made for 2016 that the total amount lent will be more than £4 billion by the end of this year. With rapid growth like this comes changes, and we expect to see many in the peer-to-peer lending industry in 2016.

The introduction of the Innovative Finance ISA (IFISA) on 6th April will allow investors to earn tax-free interest when lending up to £15,240 to businesses or individuals through peer-to-peer platforms. This could generate over £300 million in extra interest for investors according to Ratesetter. The IFISA is also likely to increase the number of P2P investors, making more funding available to SMEs. As well as P2P investments, debt securities offered by crowdfunding platforms will also be available through the IFISA from autumn 2016 and the inclusion of equity crowdfunding is under discussion.

With peer-to-peer lending increasing so rapidly, banks must react or be left behind. Some such as RBS and Santander have already entered partnerships with alternative finance providers, while others have not yet responded to rising competition they face in personal and especially SME lending. It is likely that in 2016 we will see more collaboration between traditional lenders and alternative finance providers and a greater number of banks creating their own peer-to-peer lending or fintech offerings such as HSBC’s Fintech Innovation Lab.

As well as the new IFISA, the government has shown more support for the P2P lending industry in the other tax changes due to take place in 2016. From April a personal savings allowance will be introduced for P2P investments as well as cash savings, allowing basic rate tax payers to earn £1000 a year and higher rate taxpayers £500 a year of untaxed interest. Another tax change which will help out investors comes in the form of bad debt tax relief which will also apply from April. Up until now peer-to-peer investors have had to pay tax on the gross interest rate earned from lending, but the new rules mean they will only be taxed on the actual amount they receive minus losses and fees.

This year strict regulations on alternative lenders will come into force in the UK, with platforms waiting to receive FCA authorisation over the course of the year after applying in 2015. These regulations will make alternative lending safer for investors and are likely to increase consumer confidence.  Increased regulation is also a theme worldwide, with countries such as the US and Estonia working on new regulations for lenders based on the FCA rules in the UK which are seen to be a “gold standard” in financial regulation.

With the launch of the Innovative Finance ISA, peer-to-peer lending is likely to become a more mainstream investment option. But greater efforts must be made to raise awareness of the sector, both among the general public and professionals such as independent financial advisors and loan brokers who can pass the information to clients either looking for a loan or to invest and grow their money. Recent figures from Intelligent Partnership show that only 7% of financial advisors know that the alternative finance sector is regulated by the FCA, and while some loan brokers have partnered with peer-to-business lending platforms most do not offer crowdlending as an option to raise finance. Increasing awareness of peer-to-peer lending is set to be a major goal this year, with calls for the government and the industry to make SMEs more aware about the different finance options available.

So in 2016 we expect to see peer-to-peer lending becoming a better choice for investors, and a more mainstream and accessible finance option for businesses. With so much change and the larger lending volumes expected, the year ahead is a very exciting one for the industry.