A brief history of crowdfunding 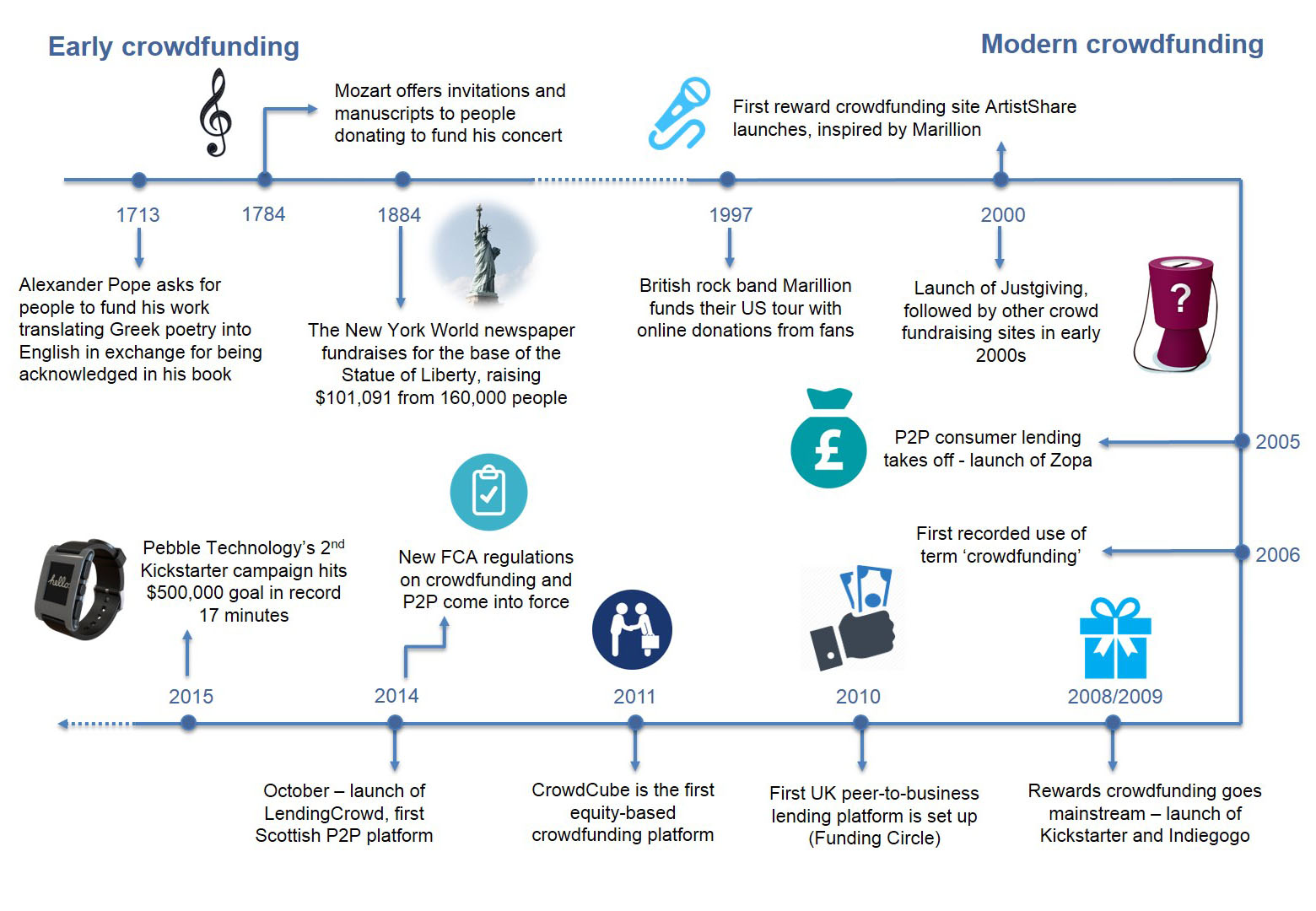 Crowdfunding has become increasingly popular in the last few years, with a rapid growth in the amount of platforms since the launch of sites such as Kickstarter and Zopa in the mid to late 2000s. But while crowdfunding appears to be a modern invention as it is heavily dependent on technology, it is actually an idea which has been used by various groups and individuals, far before the existence of the internet.

So where did crowdfunding start?

Crowdfunding at its most basic is simply a (often large) group of individuals giving money to fund an idea such as a project or a business. It can be traced back to the 1700s, when Jonathan Swift set up the Irish Loan Fund to provide loans to low-income families in Ireland. This was the earliest recorded form of microfinancing, the providing of financial services to individuals on low incomes who do not have access to traditional banking services, and is an idea which has graduated to the internet age, with sites such as Kiva aiming to alleviate poverty by lending to people in 83 countries across the world.

There are also early examples of crowdfunding being used by individuals to fund personal projects, such as Alexander Pope, who asked for donations to fund his work translating Greek poetry into English in 1713, and Mozart who, after his first crowdfunding attempt failed in 1783, successfully raised enough money a year later from supporters to perform three new piano concertos. Both of these funding attempts had elements similar to reward crowdfunding today – both Mozart and Pope offered incentives to potential donors in the form of being mentioned and thanked in their work.

A larger scale example of early crowdfunding came in 1884 when Joseph Pulitzer launched a campaign in his newspaper The New York World to raise money to pay for the base of the Statue of Liberty after the committee in charge of raising money for the project failed to reach their target. Over 160,000 donors from all backgrounds came together, donating as much or as little as they could to raise $101,091 in five months, allowing the statue to be completed.

While the basics of crowdfunding have remained the same since the Statue of Liberty campaign, crowdfunding as we know it was brought about by the arrival of the internet which has allowed people all over the world to connect with eachother and projects or causes that they are passionate about. The first incidence of modern crowdfunding was in 1997 when Brtish rock band Marillion raised money from their fans to fund their US tour. Since then the crowdfunding has risen rapidly with different crowdfunding companies and forms emerging such as crowd fundraising, peer-to-peer consumer lending, peer-to-business lending, equity crowdfunding and invoice financing.

With crowdfunding continuing to evolve and grow and alternative finance reaching over £2.5 billion in the UK alone in 2015, there is an exciting future for crowdfunding ahead!