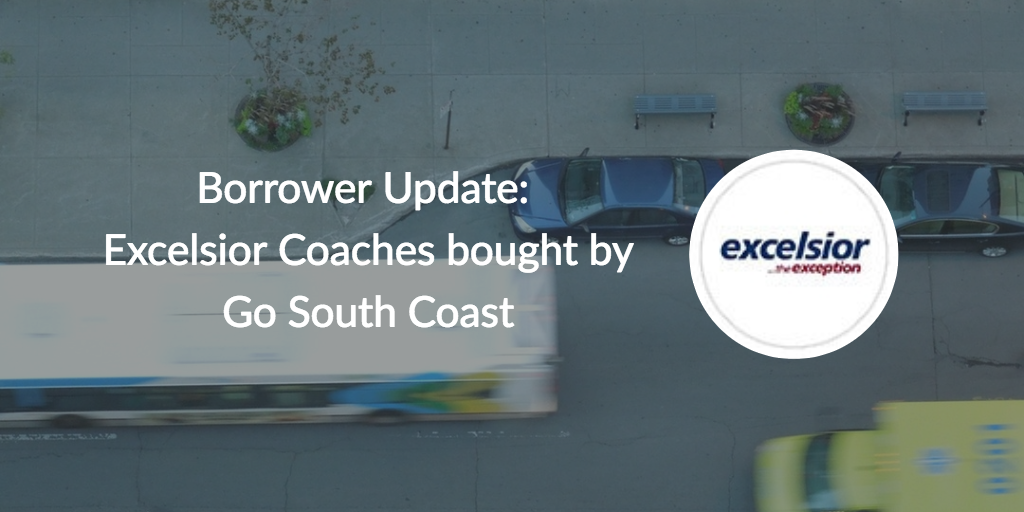 Previous borrower Excelsior Coaches, which raised £200,000 through LendingCrowd in March 2016, has been acquired by Go South Coast for an undisclosed sum. The new owner plans to keep the existing depot as well as the Excelsior name, which has existed for more than 90 years.

Ken Robins, who has run Excelsior Coaches Ltd since 2001, approached LendingCrowd for a loan in February 2016 for working capital for the growth of the private hire side of the business. The company had recently acquired 9 new coaches and were looking for funding to support the costs of the new fleet of coaches and the increased staffing costs that come with expansion. Existing client links and high demand from customers gave Excelsior Coaches Ltd an exciting opportunity to expand the business, but the company required working capital to make this possible. The award-winning business had built a strong reputation within the industry and had an established client list made up of businesses and local councils.

The Excelsior Coaches loan went live on the LendingCrowd loan auction in late February 2016 and the company received their £200,000 loan in early March, funded by 206 bids from LendingCrowd investors.

Ken Robins, Excelsior Coaches: “It can often be a daunting experience as a small business approaching high street banks in an attempt to secure funding, but LendingCrowd’s efforts to understand my business made the process of funding much easier, and subsequently, much more successful.”

The funding from LendingCrowd allowed Excelsior Coaches Ltd to grow the business by covering the associated costs of the 9 new coaches and the increased staffing levels required to cope with the expansion of the company. The loan was also used in part to cover the costs associated with being a business susceptible to seasonal fluctuations in demand. The company was able to grow its revenue stream from £1.4m to a projected £1.85m, and has now been acquired by Go South Coast.

Go South Coast has several core businesses in the South Coast area and currently operates over 750 vehicles. It is owned by Go-Ahead, which operates buses in London and across the UK, and is also a major rail operator.

You can read more about the takeover of Excelsior Coaches Ltd in this article from the Bournemouth Echo.

If you’re looking for working capital funding for your business, LendingCrowd offers peer-to-peer loans to small and medium-sized businesses. Click here to see if you’re eligible – it only takes 60 seconds! Interested in learning more? Contact us by phone at 0131 564 1600 or send an email to contactus@lendingcrowd.com.