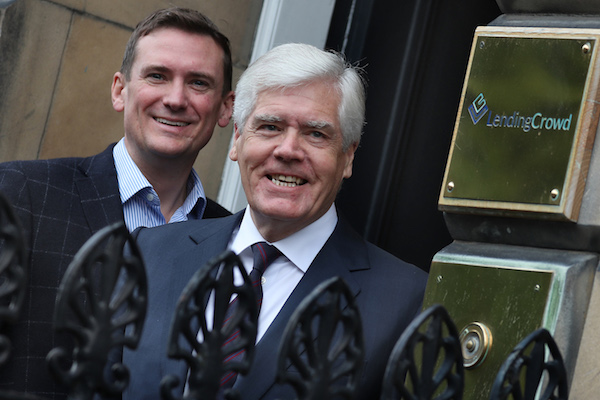 LendingCrowd, the fintech lending platform, had a double cause for celebration this week as the fourth anniversary of its launch coincided with its total number of loan deals exceeding 500.

The lending milestone, which brings LendingCrowd’s cumulative loan volume to more than £45 million, was reached just days after the platform announced the appointment of Sir Sandy Crombie, a former CEO of Standard Life, as its Chairman.

Edinburgh-based LendingCrowd, which matches investors looking for a better return on their money with SMEs seeking business loans, was launched in October 2014 by founder and CEO Stuart Lunn.

Stuart said the appointment of Sir Sandy, who was Senior Independent Director at Royal Bank of Scotland until the start of this year, is a validation of LendingCrowd’s approach to building a long-term, sustainable model that is capable of being scaled in a high-growth sector.

He added: “Exceeding the 500 loans mark on our fourth birthday is certainly cause for celebration for the whole team in what has been a momentous year for LendingCrowd.

“In March 2018, we announced our £2.2 million external funding round, which was led by angel syndicate Equity Gap and included Scottish Investment Bank, along with a number of prominent investors from Scotland’s entrepreneurial and finance scene. We also delivered record levels of support to SMEs in the first half of the year, with total lending almost trebling to £13.9 million.

“Having laid solid foundations over the past four years, and with Sir Sandy on board as Chairman, I believe we’re in a stronger position than ever to continue on our growth trajectory – creating opportunities, creating jobs and creating futures.”

LendingCrowd was one of the first fintech platforms to move from interim to full Financial Conduct Authority permission in November 2016, which meant the business was also able to launch one of the first Innovative Finance ISAs on the market in February 2017.

The business has doubled its loan book in each of 2016 and 2017 and is on track to do so again in 2018. It now has a team of 25 people across roles in business development, credit analysis, marketing, finance and technology development.