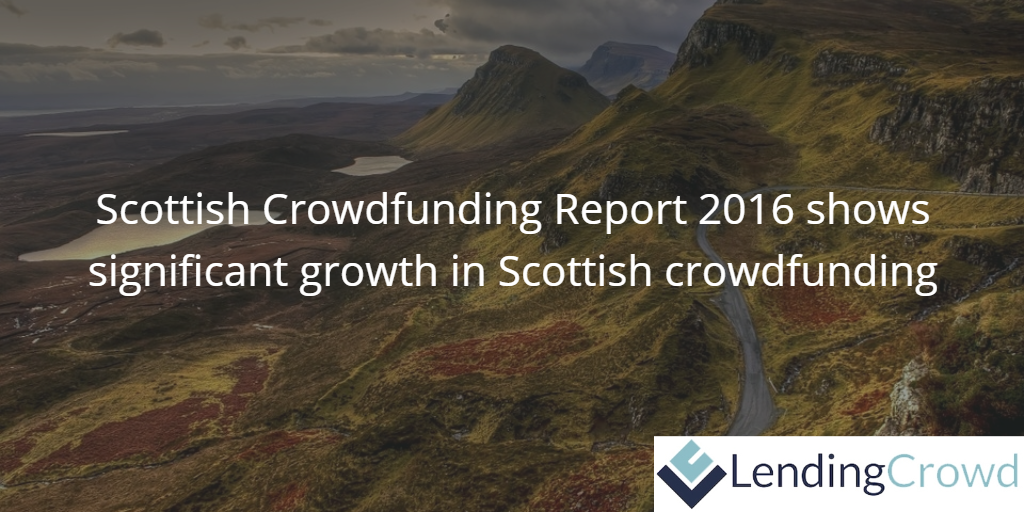 The Scottish Crowdfunding Report 2016, commissioned as an update to the “Crowdfunding – The Scottish Perspective” report originally published in 2013, had its official launch today at an event in Glasgow. LendingCrowd is delighted to have co-sponsored the report along with Glasgow Chamber of Commerce, Santander, and Harper Macleod. The 2016 report updates the findings of the 2013 report with data for the period October 2014 – September 2015 and shows significant growth in crowdfunding levels in Scotland when compared to the first study. Data from a survey, focus groups, and interviews were included in the report, as well as case studies from platforms covering each of the three researched areas of crowdfunding. 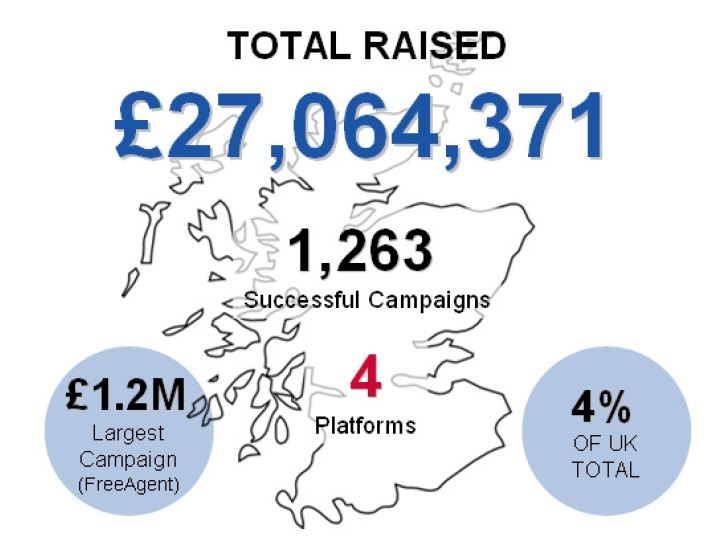 The 2016 report has found that crowdfunding raised £27,064,371 in Scotland in the period studied.This represents over 4% of the comparable UK total, a large increase from the 2013 figure of 1%. This indicates a growing awareness of, and engagement in, crowdfunding in Scotland.The funds were raised through 1,263 projects, with 410 of these being crowdlending (P2P) projects.

The total value of crowdfunding in Scotland in 2013 was less than £1,000,000, possibly caused by limited awareness of the sector and the lack of local crowdfunding platforms (Scotland had only one platform in 2013, operating in the reward subsector).

The report shows that the majority of crowdfunding activity currently takes place in the Central Belt of Scotland, but with 359,050 SMEs (small to medium enterprises) in Scotland as of March 2015 accounting for 99.4% of all private sector enterprises, there is clearly a large potential market for crowdfunding. 50% of respondents to the survey said that they would consider using crowdfunding to meet their finance needs, illustrating the potential of the market in Scotland. Respondents also indicated that there is a perception of some larger crowdfunding platforms being unwilling to engage with the Scottish market; this lack of engagement may be preventing a higher level of crowdfunding in Scotland.

Changes in UK crowdfunding since 2013

Another major trend in crowdfunding in the UK has been the increasing amount of institutional money used to finance crowdfunding projects. This has been particularly evident on crowdlending (P2P) platforms, where loans funded by institutions are increasingly common. 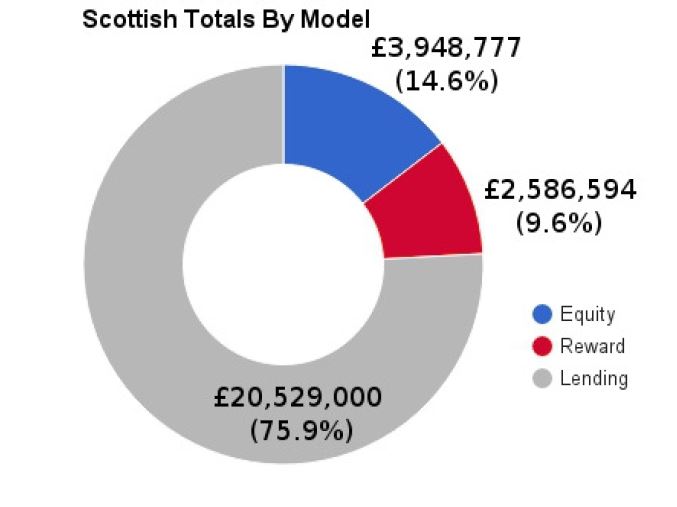 The P2P sector was the largest of the three studied in the 2016 report, with a value of £20,529,000 in the period studied. The £20.5m total value of loans represents 4.4% of the UK total of £465,940,440. The average size of a loan in Scotland was £50,070 which is lower than the UK average of £61,163. A total of 410 campaigns were successfully completed through crowdlending platforms, with an average loan term of just under 4 years. The average interest rate across these campaigns was 10% and the largest borrowing sector was Manufacturing and Engineering. These figures show that crowdlending is by far the most common form of business crowdfunding in Scotland, matching the rest of the UK. There has been significant growth in crowdlending since the 2013 report, aided by the establishment of many more crowdlending platforms including LendingCrowd, which launched in October 2014.

The main use of P2P loans continues to be expansion and growth, reflecting the findings of the 2013 report, but there is evidence that crowdlending is playing an increasingly sophisticated role in organisations’ financial planning. An example of this is the Diet Chef loan completed through LendingCrowd, which was used to finance an exit for early stage investors.

The UK government has demonstrated its support for crowdlending by placing funds onto P2P platforms through the British Business Bank in line with its commitment to increasing funding availability for SMEs. This support is also illustrated by the introduction in April 2016 of the Innovative Finance ISA, which allows investors who have invested in P2P loans to earn tax-free interest up to £15,240.

The Scottish Crowdfunding Report 2016 shows that the level of crowdfunding in Scotland has increased significantly since 2013, and this trend looks set to continue as awareness of crowdfunding grows. More businesses are likely to turn to crowdfunding to help meet their finance needs as banks continue to show reluctance to lend to SMEs, and investors will continue to be attracted by higher interest rates than currently offered by traditional savings accounts. The Innovative Finance ISA should help bring crowdlending to the mainstream market, and the more stringent regulatory regime should help boost investor confidence. It seems likely that the next version of the Scottish Crowdfunding Report will show continued significant growth in crowdfunding in Scotland, in line with the trend in the rest of the UK.