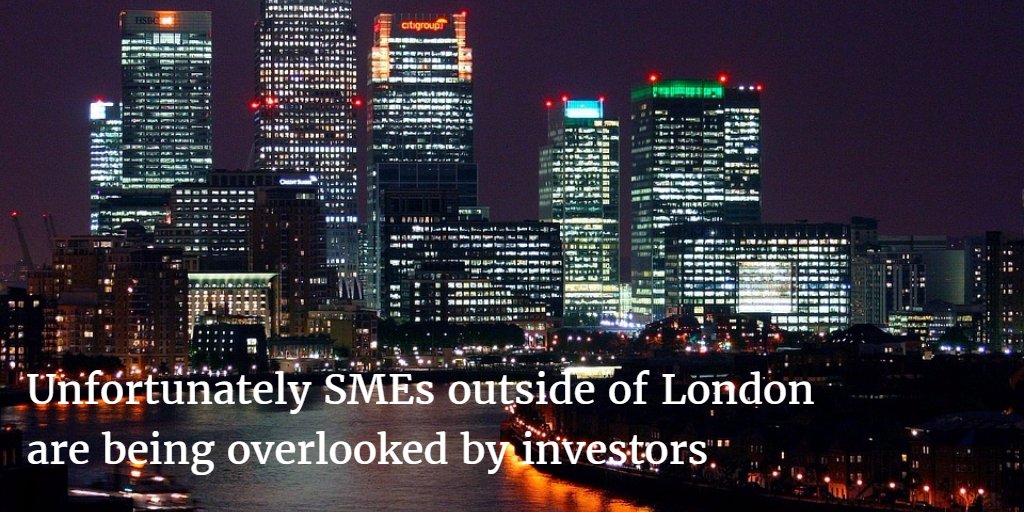 It’s fair to say that London’s status as an economic powerhouse has created a challenge for regional SMEs looking to gain finance. As capital of England and home to the City, London’s dominance has been cemented over hundreds of years. But for all its supremacy, SMEs outside of London have become increasingly ignored as investment opportunities.

Banks and investment houses are less willing to back younger companies and this mindset is compounded outside the M25. Therefore, a void has been created which is at odds with the innovation and entrepreneurism being displayed across the UK.

It is clear SMEs are vital to the economy but they face many challenges. As well as a lack of bank financing for these companies there is also ambiguity over how Brexit will impact the 1,000 or so EU abroad-owned enterprises operating in Scotland (currently generating a turnover of £36 billion).

However, investors are naturally less inclined to choose SMEs. The risk (most new businesses fail in their first 18 months) means companies of a certain size and age are treated the same and dismissed early on.

But some of the best growth opportunities can be found in smaller companies before they reach a plateau. With the right due diligence, great companies can be found at a stage where the only thing standing between them and their goals is a timely injection of capital.

Time for a shakeup

While there are SMEs based in London to invest in, the capital’s expensive nature is already starting to put off even the biggest companies. Surge in rents means several businesses – ironically, including banks such as HSBC – have started to relocate their workforces elsewhere. Strain on salaries and living costs could lead to a potential ‘brain drain’ as people start to move away for the much cheaper business hubs of Birmingham, Edinburgh and Glasgow.

Add into this the ambiguity around Brexit’s impact and London is losing its lure as a business destination. SMEs could choose to launch where they already are or expand across the UK before attempting to crack the capital. One thing is certain, there is more room outside of the capital for SMEs to flourish if they gain the right funding.

While banks have pulled back from SME lending, alternative finance providers have filled this gap and the sector has flourished. As well as paying attention to a largely-ignored subset of the market these platforms offer a type of financing that matches the SME’s urgent needs in a flexible, speedy and efficient manner.

Traditional funding is outdated in many ways and the box-ticking of granting business loans can be harmful for SMEs that urgently need capital. Peer to peer (P2P) lending is the very different and allows the crowd to quickly and directly lend capital to borrower companies. Traction is building and more SMEs are starting to discover this. LendingCrowd, Scotland’s only P2P lender, launched in 2014 and has so far facilitated over £7 million of such loans.

For these reasons, we expect P2P lending to SMEs to grow in 2017. Alternative finance has already taken huge steps and grew to £3.2 billion in 2015 and the FCA has started to authorise some platforms. The picture for London is uncertain but ensuring the UK’s SMEs, a valuable driver to the national economy, have the financing and support remains a priority.